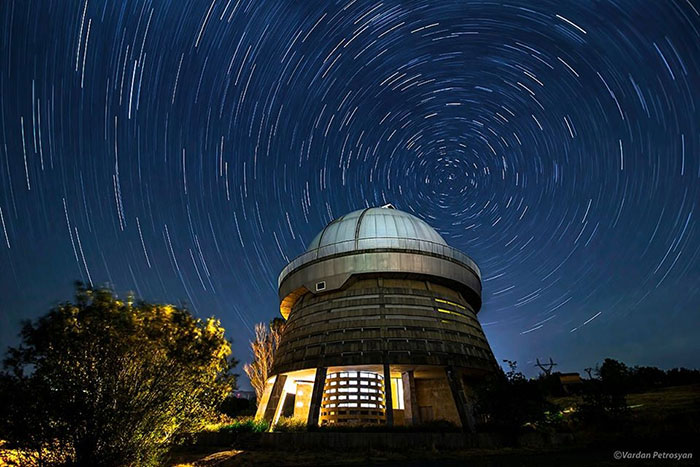 Space Activities in Armenia: Past, Present and Future

Armenia with its astronomical and other related background has great potential in establishing collaborations and promoting Space Sciences and Space Technologies.

Space Astronomy and Space related science at BAO in 1960s-1980s
Grigor Gurzadyan (1922-2014) was the pioneer of Space Astronomy in Armenia and one of the pioneers in the USSR. In 1960s, using ballistic rockets R-5, he directed the UV and X-ray observations of the Sun and stars. His paper “A Powerful X-ray Flare on the Sun”, published in Communications of Armenian SSR Academy of Sciences in 1966 is among the earliest papers on Space Astronomy. Then Gurzadyan moved to the design of Space orbital observatories; Orion ultraviolet (UV) space telescope were the most famous ones. In April, 1971 the first space station Salyut 1 carried onboard Orion 1 the first Space telescope with an objective prism.

But the highlight was Orion 2, which was operated onboard the spaceship Soyuz 13 in December, 1973.

Spectra of thousands of stars up to 13th stellar magnitude, the first satellite UV spectrogram of a planetary nebula were obtained revealing spectral lines of aluminum and titanium – elements not previously observed in planetary nebulae, two-photon emission from nebula was detected for the first time. For comparison, the US Skylab’s UV telescope, which was on the orbit at the same time, could only observe stars up to 7.5th magnitude. The obtained results were published in the most important astronomical journals, including 3 articles in “Nature”.

BAO researchers were engaged in other Soviet Space projects as well. Hrant Tovmassian (1929) worked on the Space ultraviolet telescope Astron (Crimean Astrophysical Observatory; Boyarchuk et al. (1984)). Tovmassian’s team made the guiding system. An offset guidance was proposed, which was made by the relatively bright star located nearby to the observed object on sky. It was made at the Granit Special Construction Bureau (SCB). The head of the project and the manufacturing was Marat Krmoyan. The telescope was launched into orbit in1984.

Later on, Tovmassian initiated the project of the Space Ultraviolet Telescope Glazar for study of the far UV emission of OB type stars in stellar associations. The space telescope Glazar was projected and constructed in the Granit SCB in Garni. The diameter of the telescope mirror was 40 cm. The Ritchey-Cretien optical system provided 1.3 deg field of view. Observations were made at 1640A wavelength. The used optic-electronic detector transferred 1640A image of the observed field to a visual light, magnified it, and photographed at the ordinary film.

The telescope was launched into orbit and attached to the Mir Space Station in 1987 (Tovmassian et al. 1988). Observations have been carried out by cosmonauts by commands from the center of the space communications at Energia near Moscow. Cosmonauts brought to the Earth the exposed films upon their return from the orbit.
A number of scientific results were obtained, including the study of OB associations, discovery of dust envelopes around some distant B type stars,etc. In 1990, the Space Ultraviolet Telescope Glazar-2 was constructed and launched into orbit and attached to the Mir Space Station. It differed from the first Glazar by higher sensitivity achieved by using the better ultraviolet filter. However, it did not work due to problems after the collaps of the Soviet Union.
In 1990 at the Granit SCB we started the the projection and construction of the fully reflecting 1m Astrophysical Schmidt Orbital Telescope (ASchOT) (Tovmassian et al. 1991). It was planned to perform an image and a spectral sky survey at 1500A. However, in the result of the collapse of the Soviet Union, the works on manufacturing the ASchOT were ceased.

Academician Norayr Sisakyan (1907-1966) was one of the founders of Space Biology and Space Medicine (Space Biomedicine). Sisiakyan was the Vice-President of the International Academy of Astronautics. For some new directions of biochemistry, we owe Sisakyan, who was more interested in cosmic biology. The scientist was convinced that the universe needed to look for life and organism, without doubt that there should be microorganisms at all. Thus, the scientific basis was based on the development of gravitational biology, the study of dimension and, as a consequence, the scientific principles of selection and preparation of cosmonauts, as well as the environmental, astronauts’ survival and security issues. He did not doubt that Gagarin’s flight would succeed, and he thought modestly that he had his scientific contribution to that success.
Telecommunication systems of Venus landing module were designed in NAS RA institutions, namely Institute of Radiophysics and Electronics (led by Radik Martirosyan), and experiments on microbes were developed on Soviet spacecrafts (led by Evrik Afrikyan). Space Astronomy and Space related science at BAO in 2000s-2010s A number of astrophysical research projects were carried out by BAO scientists with USA (NASA) and European (ESA) Space observatories. Some of the BAO scientists participated in American and European space astronomy programs, in particular Artashes Petrosian participated in the Hubble Space Telescope (HST) programs (Hayes et al. 2005, Kunth et al. 2010, Mas-Hesse et al. 2009) in collaboration with STScI in Baltimore, USA, and Areg Mickaelian’s observational project on study of high-luminosity IR galaxies and IR excess galactic stars were carried out on IR Spitzer Space Telescope (SST) in collaboration with Cornell University (Ithaca, N.Y.) team (Hovhannisyan et al.2009, Sargsyan et al. 2008). Mickaelian’s Astronomical Surveys research department at BAO extensively uses space multiwavelength data for astrophysical research. Most important space telescopes that are used for multiwavelength analysis are IRAS, ROSAT, HST, SST, WISE, Herschel, etc.

NAS RA Byurakan Astrophysical Observatory has signed a contract with the Russian Space Agency “Roscosmos” in 2014, according to which monitoring of space artificial fragments (space debris) is carried out in Byurakan. Every year, some 200 observing nights are being used for some 400,000 measurements and some 600,000 orbits for artificial satellites are being recovered.